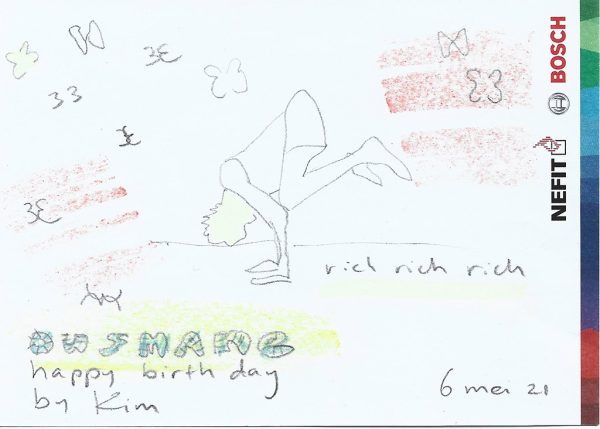 Happy Birthday, Ousmane is the first drawing I did in the Happy Birthdays Series. The paper comes from a Nefit Bosch tear-off paper block. The block consisted of forty sheets of paper (when I started the project). And has a postcard size (14,63 x 10,46 cm (5.76 x 4.12 in).

So I asked Ousmane, What is on your wish list? And how old will you be? He told me 33. And that he had a lot of wishes. He wrote he wanted to be independent, rich, and ECC. I asked him, what is ECC? And he sent me a voice message, saying it means extra extra. I asked Extra Extra C…? He wrote back, Yes.

I had scheduled his video for exactly midnight. And I had sent him the YouTube premiere link. He was still awake, so we celebrated his transition from going from 32 to 33.

Then please email me