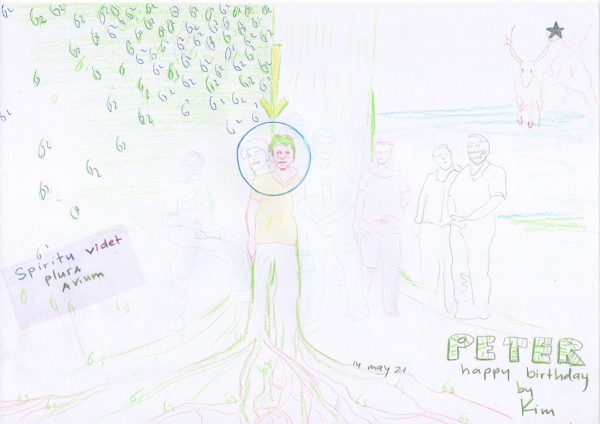 Happy Birthday Peter, is the second drawing I did in the Happy Birthdays Series. This drawing I drew on a regular A4 size printing paper. And not on a postcard size paper from the Nefit Bosch tear-off paper block, which I decided later to draw on exclusively for this series of Happy Birthdays Drawing.

I know Peter since 2003. We met during one of my many second jobs early on in my artist career, when I was still living in Rotterdam. He was working as a journalist for the magazine H2O in Schiedam. And I worked for Nijgh Periodieken in Schiedam, the umbrella branch of the magazine. He is also the one who gave me in 2008 the idea to start a club of artit’s friends. Which is what I am still offering today. See VIP Artists Friends.

For a while, we were a bit out of touch. Mostly I think, because of my traveling and living in Sweden, the US, Spain, Germany, and China. But I am happy to be back in Europe again. And that we are back in touch now. And also very pleased that Peter is one of the people who reached out to have a drawing made for his birthday.

When you look at this drawing you could play Spiegel im Spiegel, from Arvo Pärt. Which was on his birthday wish list. The music feels soft and light. I think therefore I drew this drawing quite light. There is no black present. The heaviest color is grey from the pencil en blue from the ballpoint pen.

When I think of Peter, I think of a free spirit yet rooted in the ground. So I would like to give him a drawing with the expression, A free spirit sees more birds. I drew this as a planted signpost in the ground. Presenting him always with the right direction on his many walking tours, he loves to take. I wrote it in Latin to show his intellect. Spiritu videt plura avium.

And also, to make a cross-reference to one of the books that were on his birthday wish list, The new guide to the non-existent birds of Europe, by O.C. Hooymeijer.

Another book on his wishlist was Ons Wilde Oosten 2.0. (Our Wild East) by Michiel Hegener. With on the cover, dears running through water. These dears I drew in the distance, in the back of the drawing. This might also indicate that Peter is a natural person. And that nature is always approaching in his life.

One of the dears has a dark grey star in his antlers. This star, although in the top right of the drawing is not showing a black night. But referring to the album, Black Star by David Bowie. Which was also on his birthday list.

I drew him with his feet firmly, as of those of a healthy tree, rooted in the earth. And the bushy (his) healthily leafy green leaves coloring the light, softly green, for those standing under the tree. The leaves emphasized by pen, with the number 62, his new age on 14 May 2021.

Next to him are standing fellow interested tree lovers. And his love Karin peeks her head over his right shoulder. I drew her into his inner circle, which I drew literally as a blue-colored circle.

A big arrow is pointing downward. Expressing that Birthday “boy” Peter is in the middle. I marked his shirt and this arrow, yellow with a bright yellow marker. To make him stand out from the drawing and to show his modernity.

I wish Peter many more wonderous walking trips and a forever free mind who can see plentiful birds.

Then please email me.